Keep your workouts fresh and exciting. Exercising with Passport Media Player can transform your static workout­ routine into a dynamic adventure, filled with intensity, excitement and education. While en route, scrolling text appears on-screen to inform the user about locations along the way.

Compatible with all Vision Fitness Classic, Touch and Elegant consoles, Passport Media Player with Virtual Active (available for purchase as an accessory) allows users to travel to exotic locations from all over the world.  Below are two of my favorite locations destinations, though that may change as more destinations will become available in the future.

While traveling through Chicago, you’ll notice thousands of tulips along Michigan Avenue, also known as ‘The Magnificent Mile.’ These tulips typically bloom in late April, just north of the Chicago River. The historic Water Tower is the largest shopping district in Chicago, with an impressive 3.1 million square feet of retail space. More than 22 million people visit this area annually, where dozens of the world’s leading luxury retailers have a strong presence.

Along your journey you’ll pass through Millennium Park, which is known for its beautiful and interesting public art installations. The infamous ‘Cloud Gate’ (referred to by Chicago residents as ‘The Bean’) is a three-story, 110-ton sculpture that distorts objects with its curved mirror/reflective surface.

From there, you’ll travel along the Chicago River through the heart of downtown. There are 38 movable bridges that span across this river. In a feat of engineering, the flow of the river was reversed for sanitation purposes in the early 1900s. The river is famously dyed green each year in celebration of St. Patrick’s Day. In1992, the river broke into an underground freight tunnel network, flooding the lover levels of many buildings.

The journey to Northern Italy takes you though areas where early adventurers in the Bronze Age were attracted to due to the prevalence of copper ore. Marble, semiprecious stones and oil shales have also been found in this region. Travel along the historic road to Timmelsjoch, which was built in 1959 to accommodate tourists while seamlessly blending into the landscape. Back in 2007, this infamous city had an average of 50,000 tourists a day. On the border of Austria in Italy’s Otztal Alps, Timmelsjoch is often referred to as the ‘secret passage’ because it is used less heavily than other mountain passes in the area.

The transition from Timmelsjoch to Venice is quite noticeable as Venice has no roads and is only navigable on foot or by boat. Known for its canals, gondolas, and beautiful architecture, Venice is also recognized for its film festival. Founded in 1934, the Venice Film Festival is the oldest film festival in the world. Another site worth noting along your voyage is Piazza San Marco, or ‘The drawing room of Europe.’ This is one of the few great urban spaces left in the area that’s not polluted by the sound of motorized traffic.

Try either of these destinations on your Vision Fitness treadmill, elliptical or exercise for an entirely different, interactive workout experience. 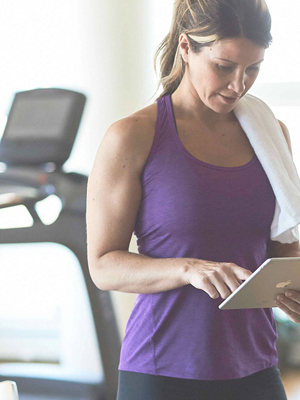